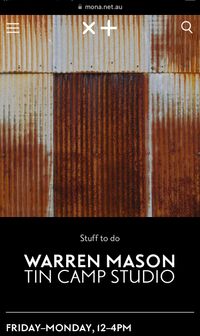 A pop-up performance space constructed from salvaged materials, modelled on the Aboriginal-built tin camps found at the edge of countless Australian townships from the 1950s to today. Constructed by Tin Camp Studios founder—and proud Yuwaalaraay man—Warren as a place for sharing music, dance, storytelling, and healing (and recording), Tin Camp Studio will be hosting our outdoor music until late November. Warren will also be co-programming acts and performances throughout the studio’s time on the lawns.

Tin Camp is a First Nations-led project developed by Warren Mason and supported by Kath Melbourne. It is presented by Contemporary Art Tasmania and Mona. Tin Camp has been assisted by the Australian Government through the Restart Investment to Sustain and Expand (RISE) Fund—an Australian Government initiative; Live Music Australia and Regional Arts Australia; and Arts Tasmania by the Minister for the Arts.