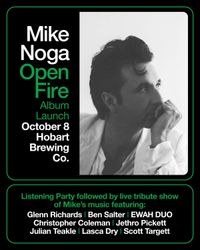 Tickets are sold out however you can still join us as we will be live streaming the whole event to the Hobart Brewing Co beer garden. We will have a big screen set up and will be broadcasting it those outside for free. No entry fee, just grab your mates, a brew and your love for Mike and come and join us in celebrating him.

The event will be a listening party with Open Fire being played in full accompanied by visuals created by Justin Ridler, Ursula Woods and Brad Harris. The footage depicts dreamscape images of some of Mike's favourite places in Tasmania.

Following the album listening there live performances of Mike's music by: